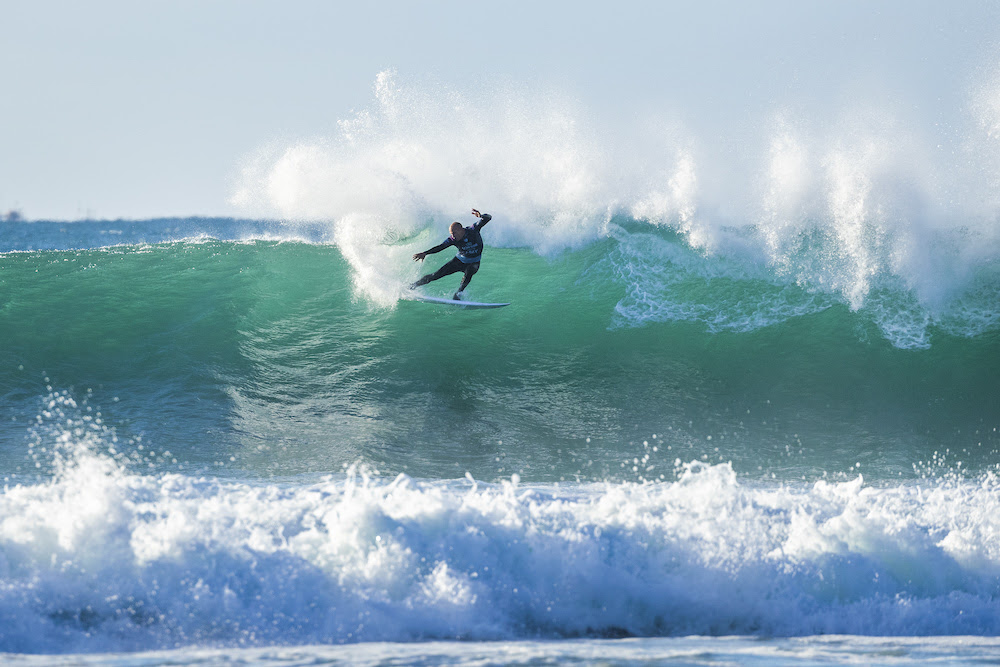 Championship Tour surfers arrive in town as the JBay Winterfest kicks off.

JBay – With the Corona Open JBay all set to start on 9 July the best surfers in the world have begun to arrive at the fabled right-hand point of Supertubes in Jeffreys Bay. The Corona Open JBay is known as the most popular stop on the World Surf League (WSL) Championship Tour (CT), and it is stop number 6 on the 11-event tour.

Currently ranked number 1 on the Jeep Leaderboard, and a two times world champion John John Florence from Hawaii has withdrawn from the event due to injury. He suffered a ruptured ACL (anterior cruciate ligament) in the knee and will not be competing for the rest of the season.

His withdrawal from the event opens up the world title race for the top three surfers, and the Corona Open JBay is where the leaderboard will change and plans will be put in place for the back half of the year.

Currently sitting at number 2 on the rankings, Kolohe Andino from California has had a very good competitive year and has been on-form in the first couple of events. He was a runner up at the first event of the year, the Quiksilver Pro Gold Coast, where he lost to Italo Ferriera from Brazil in the final. He got another runner-up position at the Margaret River Pro to John John Florence, and was a third-place finisher at the Oi Rio Pro in Brazil.

Third-ranked Filipe Toledo was the runner-up to a rampant John John Florence at the Rip Curl Pro Bells Beach, and won the Oi Rio Pro. He is also the two times defending champion at the Corona Open JBay and is obviously hungry for what would be a record-breaking third win in a row here. Toledo has one of the most dynamic and exciting air games in the world of professional surfing, and his approach to the waves of Supertubes is always nothing short of phenomenal.

In fourth position is South African surfer Jordy Smith. He placed third at the Quiksilver Pro Bells Beach and was the runner-up in Rio to Toledo. He also has two wins at the Corona Open JBay under his belt, claiming victories in 2010 and 2011. Jordy also has the rare distinction of scoring a perfect 20-point heat in 2017. Jordy is a firm crowd favourite at Supertubes, and the roaring of the crowd is one of the things that he has often spoken about as an incentive to do well at Supertubes.

“You can hear the crowd cheering loud and clear when you’re out there,” said Jordy about the spectators’ participation. “It definitely spurs you on to surf your best and to put on your best performance.”

The 11-times world champion Kelly Slater is still very much in the game coming in to Jeffreys Bay. Currently rated at number seven, he is also a veteran at Supertubes, with four event titles to his name. He is always a standout at Supertubes it is a well-known fact that he is hungry for a 12th world title. He has made it known that he will be retiring at the end of this year and wants to finish on a high note.

In the women’s event, defending champion Steph Gilmore from Australia is currently placed third on the Jeep leaderboard. Sally Fitzgibbons (AUS) and Hawaiian Carissa Moore are first and second on the leaderboard respectively, with very little difference in their points. The Corona Open JBay will see a big reshuffle of the ratings on the women’s side.

Former CT surfer Bianca Buitendag from Victoria Bay will be competing in the event as a wildcard. She recently won the inaugural Vic Bay Pro QS 1,000 event at her home break, and finished third at the 2018 Corona Open JBay, losing out to Lakey Peterson (USA) in the semifinals.

The Corona JBay Open is the anchor event for the JBay Winterfest, and takes place from 9 – 22 July. Download the JBay Winterfest app and stand a chance of winning a hamper comprising a Firewire Slater design Gamma surfboard, a Vissla wetsuit and more.

The JBay Winterfest includes the Endurade JBay X Trail Run, the Funduro Moto X, the Fishing Skins Tournament, and the Winterfest Bowls Tournament. There is also the Vibe In The Park music sessions comprising a host of the best South African bands and musicians jamming for free. There is a comedy festival, pop-up surf movies from the Wavescape Film Festival, book launches, pro signing sessions and more. For more information go to www.jbaywinterfest.com