The eight-round SA National Rally Championship reaches the halfway mark with the Volkswagen Rally in the Eastern Cape on July 11 and 12, and competitors and fans can expect a new look to the staging of this popular and challenging event. 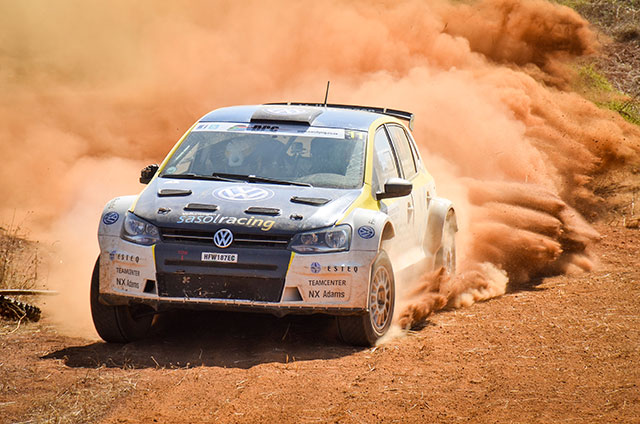 Long-standing clerk of the course and route director Joe Fourie, of the Algoa Motor Sport Club, and his experienced organising committee have been busier than usual preparing for the highlight of the Eastern Cape’s non-circuit racing calendar.

“While we’ve gone to lengths to ensure we don’t lose the unique character of this event, circumstances have required that we find some brand new stages and provide spectators in the Port Elizabeth area with new opportunities to get closer to the action,” said Fourie.

“The traditional gravel special stages in the Longmore forests inland from Jeffrey’s Bay will still be the core challenge of the rally and will feature on both days.

There will be a total of 15 stages, seven on Friday and eight on Saturday, with 12 on gravel (five in the Longmore Forest), two on tar and one a combination of tar and paving. Total special stage distance is some 180 kilometres out of a total rally route distance of around 500 kilometres.

“The official start is at 12:00 on Friday from the Volkswagen Auto Pavilion in Uitenhage then travels directly to Greenbushes for a brand new, 16-kilometre gravel special stage on the property of the PE Oval track, which will be repeated as stage nine on Saturday,” said Fourie.

The first of the five stages in the Longmore forest, the 19-kilometre Culturama, will be stage two on Friday and will be followed by a new, 15-kilometre stage in the Gamtoos Valley that finishes on the outskirts of Hankey.

Then it’s back into the forests for the traditional PPC stage over 25 kilometres before returning to the Gamtoos Valley for stage five, called Melon and covering some 10 kilometres. The rally then moves across to Jeffrey’s Bay and the two tar town stages that were first featured last year. The first of these, stage six, is a short 600-metre course in the parking lot of the Fountains Mall alongside the N2 highway while the day’s finale will again be over 1,6 kilometres in the streets of J-Bay, which proved so popular with the locals last year.

Gabriel Jewellers of the Fountains Mall is again sponsoring two Tissot watches for the winners of stage six.

The competing cars will be impounded at the PE Oval track overnight.

Saturday’s action starts at 07:00 from the PE Oval facility with a brand new super special stage featuring a cross-over bridge that has been built alongside the oval track. “We expect this to be a spectator highlight of this year’s rally,” said Fourie. “The stage has been built and sponsored by Mawethu Construction.

“It’s this kind of enthusiastic support we receive each year from businesses, land owners and our principal sponsors, Volkswagen, that makes it possible for us to present this event and to keep improving it each year. We thank them all.”

Saturday’s second stage will be a repeat of Friday’s opening stage on the PE Oval property, but will be a kilometre shorter. Then it’s into the forests for a repeat of Culturama followed by a repeat of Melon stage, but in reverse direction, and a second run through PPC in the forest.

Stage 13 is a reverse of Culturama that was first used last year and called Sinkdam. The penultimate stage is a repeat of the PE Oval super special.

Breaking with tradition, there will no longer be a super special stage in the parking area at King’s Beach in Port Elizabeth. This year the rally will end at the Nelson Mandela Bay Stadium with a 1,4-kilometre special stage around the tar and paved perimeter of the stadium. “The city fathers and the managers of the stadium have been very helpful in assisting us to put on a new finale to this year’s event, which is the 32nd that has been sponsored by Volkswagen, and we’re confident it will prove to be a big hit with the fans and competitors alike,” added Fourie.

Fourie says that the roads are all in good condition and does not expect wet weather to be an adverse factor. “It’s been very dry in the area. A little rain will help settle the newly graded roads and keep the dust levels down, especially at the super special in Greenbushes, and we’ll be making use of water tankers here.”

The first car is expected at the finish at around 14:15 and a podium prize-giving ceremony will take place at the Nelson Mandela Bay stadium at 16:15.

The VW National Rally will also include competitors for  Round 3 of the Algoa Rally Club’s R50kChallenge.