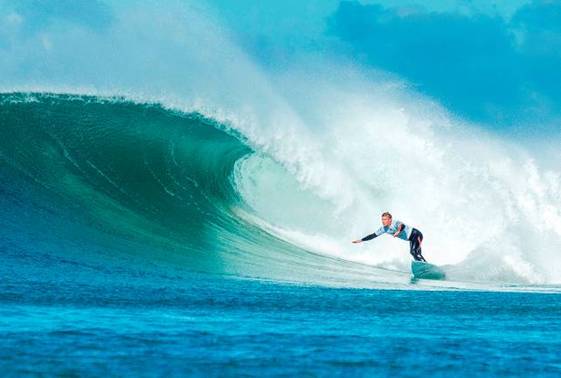 The world’s best surfers and picture perfect two metre waves at Supertubes combined to produce a spectacular display of high-performance surfing on the opening day of the Corona Open J-Bay in Jeffreys Bay today.

Stop No. 6 of 11 on the World Surf League (WSL) Championship Tour (CT) ran through Round 1 of competition with the WSL Champions all progressing directly to Round 3 by winning their respective 35 minute heats.

Reigning WSL champion John John Florence (HAW) delivered a near perfect performance, racking up three scores over 9 out of 10 for a heat total of 19.37 out of 20, the highest of the day. 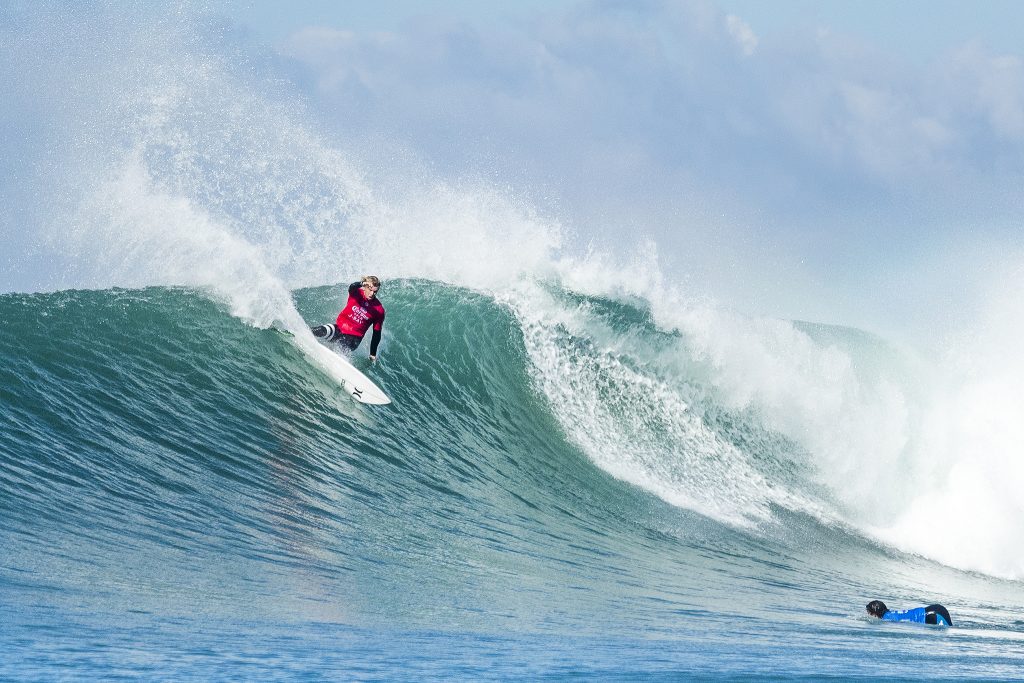 Reigning World Champion John John Florence of Hawaii advancing directly to Round Three of the Corona Open J-Bay after winning Heat 6 of Round One at Supertubes, Jeffreys Bay, South Africa. www.worldsurfleague.com

“I’ve had waves similar to this free-surfing, maybe as good, but not in a contest. It’s just a whole different wave when there’s no one out there and you’ve just got this empty canvas, one of the most amazing waves ever,” said an elated Florence. “This is one of the most spectacular surfing arenas, the waves are so close to the beach, it’s almost got that Pipeline feeling. Not only that, it’s a picture perfect wave, like the ones you draw on your school books when you’re young.”

Despite producing two excellent rides of his own and a heat total of 16.03, which would have been enough to win five of the12 heats on the day, South African wildcard Dale Staples (St Francis Bay) needed to replace both his scores to overtake Florence.

Staples will be up against compatriot and two-time J-Bay winner Jordy Smith (Durban in Round 2 when the competition resume.

Smith finished second behind Conner Coffin (USA) in his Round 1 encounter. The American caught one of the waves of the day and rode it flawlessly, including disappearing from sight in a deep barrel to earn 9.37, which along with his earlier 7.67 was enough to take the heat win and a berth in Round 3.

Wildcard Michael February (Kommetjie) finished third in the heat and will duel with current  No. 1 on the Jeep leaderboard, Matt Wilkinson (AUS) in Round 2.

“I wanted to be on the best waves as that was the only way I was going to be able to beat Jordy (Smith) and Conner (Coffin),” said February. “The heat was bit slow, we only had three or four sets, and I made a mistake when I had priority and I went on the first wave in the set and let Conner have the second. The same thing happened earlier when Jordy went on the first wave and didn’t get such a good ride and I got the second wave and it was better. But I had lots of fun and you can’t complain when you’re riding really good J-Bay with only two other people out. It’s all about experience for me.”

An impossibly deep barrel from 2014 WSL Champion Gabriel Medina (BRA) was rewarded with a near-perfect 9.93, the highest single-wave score of the day, and a confident victory over opponents Stuart Kennedy (AUS) and Caio Ibelli (BRA). With four previous Quarterfinal finishes at Jeffreys Bay, Medina is keen to post a strong result in South Africa to move up inside the top ten on the Jeep Leaderboard.

Three-time WSL Champion Mick Fanning (AUS) opened his Round 1 match-up with a bang and posted an 8.50 for a series of big carves. The defending and four-time event winner improved his lead with another excellent score, an 8.73, to advance easily to Round 3 over Sebastian Zietz (HAW) and Joan Duru (FRA).

Event officials will reconvene tomorrow morning at 7:00 a.m. local time to assess the conditions and make the next call.

Overlapping SW to SSW swells through the weekend will provide fun to mid size surf. Light offshore flow Saturday will become strong/breezy offshore flow Sunday. Monday will see a decreasing trend for the first half of the day as offshore flow likely continues. A new, and potentially strong, SW to SSW swell looks likely to build in through Tuesday before easing Wednesday. Favourable wind looks likely. There is potential for more SW swell for the end of next week.

The event will be broadcast LIVE via WorldSurfLeague.com, the WSL app and on Facebook LIVE via the WSL’s Facebook page.

For more information, check out WorldSurfLeague.com.

The Corona Open J-Bay is the showcase event at the J-Bay Winterfest, a multi-sport and cultural festival in Jeffreys Bay from July 12-23. More details at www.jbaywinterfest.com. .

The Content is provided, on an “as is” basis and no warranty is provided for its use by you. World Surf League owns all rights, including copyright to the Content. ALL RIGHTS NOT SPECIFICALLY PROVIDED ABOVE ARE RESERVED BY WORLD SURF LEAGUE.