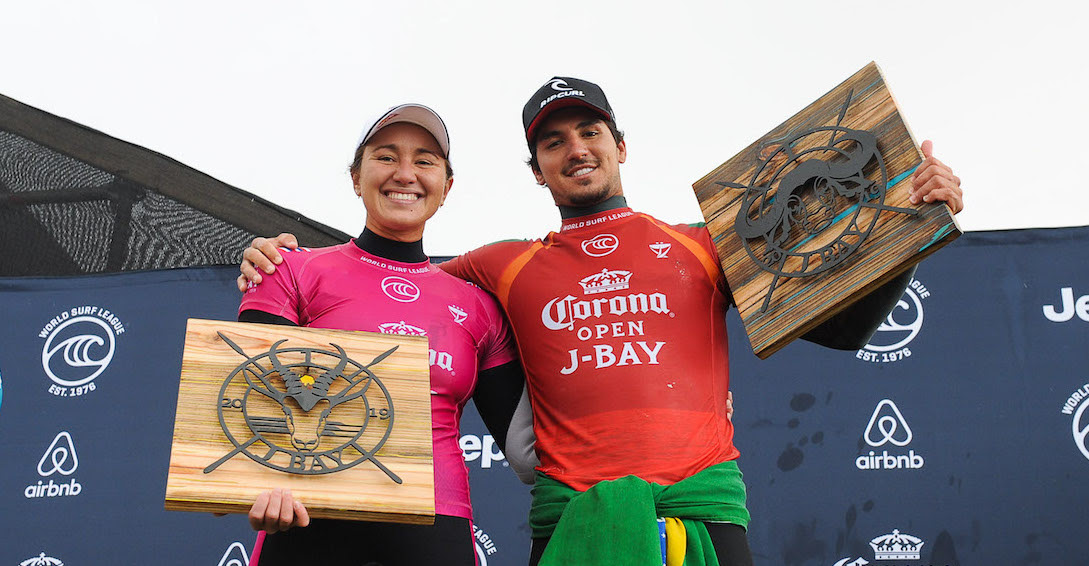 JBay – In one of the most dramatic and exciting finals in a while, Gabriel Medina (BRA) came from behind to wrestle the Corona Open JBay title from an on-form Italo Ferreira (BRA) and become the first goofy-footer to win it since Marc Occhilupo’s audacious victory in 1984.

Needing a 7.04 score in solid, blustery conditions at Supertubes, Medina picked up a set wave, and went about executing some high risk moves underneath and over the falling lip, before setting up for a tube ride on the inside. He emerged from a long double-section tuberide – the best backhand tube of the entire event – to the roars of the crowd and the general expectation that it was a perfect 10–point ride, or very close to it. The judges awarded him a 9.77, and in so doing the winner’s trophy.

Italo Ferreira put on a spirited performance, but it was not enough to oust Medina. He started off the final in the first few seconds of the heat with one of the best waves of the day and was awarded a 9.10 for the ride to the cheers of the assembled crowds. Despite the rain and freezing wind, the spectators gathered and supported by applauding and cheering their surfing heroes throughout the final day’s surfing.

In the Corona Open JBay Women’s final, it was a tight battle between Lakey Peterson (USA) and Carissa Moore (HAW). They both fought hard in the excellent offshore conditions, but Moore banked an 8.5 score for one very impressive ride, and took the win from Peterson. Carissa surfed an excellent event and the multiple world champion was over the moon with her win. “I feel like it’s all coming together again,” said an elated Moore after the results were announced. “I didn’t have the best year last year (she finished third in the 2018 ratings) but it feels like something has clicked, that something I am doing is working now.”

It was a huge day of surfing for the final day of this year’s event. In blustery early morning conditions Medina put on a solid performance against Owen Wright (AUS), and although the Australian had an early lead, it was the Brazilian goofy-footer who emerged victorious.

Kolohe Andino (USA) took to the skies for his encounter against Ace Buchan (AUS) and scored a fairly comfortable win against the elder statesman with a 7.93 score for the massive air reverse sealing the deal.

The first women’s semifinal was an exciting affair, with Carissa Moore picking up some bombs and striding into the lead against the powerful goofy footer Caroline Marks (USA). At the end of the heat it was Moore who took it with a final 8.33 score for a set wave that she performed a number of critical turns all the way to the gully.

The second women’s semi saw last year’s runner-up Lakey Peterson (USA) take on Malia Manuel from Hawaii in the vastly improved conditions. The two natural-footers faced-off and at the closing siren it was Peterson through to the final with a stoked Manuel settling for a very respectable third place.

The first men’s semi once again saw Kolohe Andino take to the air, but it was not enough to get ahead of the Brazilian goofy-footer and current world champion Gabriel Medina. After a last-ditch victory in the round of 16 against Australian Ryan Callinan earlier on in the week, Medina looked like the most hungry surfer in the water in this heat, despite Andino’s aerial surfing prowess.

In the second semi it looked like it was all set to be another goofy-footed Brazilian in the final when Italo Ferreira went to town on one of the set waves and banked a 9.5. Up against two times winner and defending champion Filipe Toledo, also from Brazil, Italo threw caution to the wind and went for some huge moves on his backhand for the win. In the end it was Ferreira who did enough, and Toledo was thwarted from achieving a hat-trick of wins at the event.

Medina goes into the seventh spot on the Jeep Leaderboard Men’s ratings while Moore takes the number one spot in the Women’s, and the Yellow Jersey. Vibe In The Park Tonight