Jordy Smith was on fire today, registering the highest three wave tallies of the day. It’s what fairy tales are made of, writes Jazz Kuschke. Photo Joey Nel. 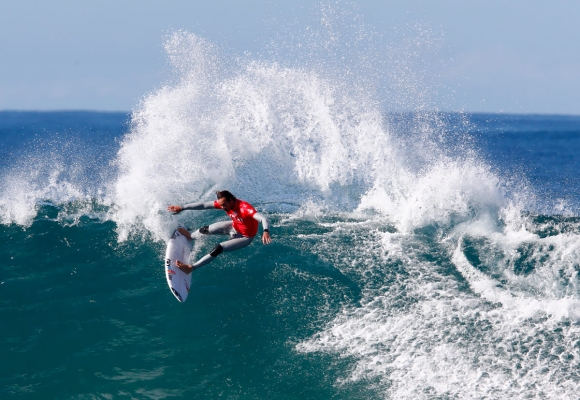 Fairytales… Yeh let’s talk about that. It’s early days (the first day of the 12-day waiting period to be exact) and we’re the last cats to wanna go drop some kind of ‘commentator’s hoodoo’ on the man; or place any undue pressure but hell; did Jordy deliver in a fable-like fashion, or what.

The defending champion (even though it was three years ago, Jordy won the previous CT event held at JBay, his second, which technical puts him in line for a hat trick) racked up 19.30 points on back-to-back waves. Smith flashed a combination of local knowhow and calm confidence putting the rail where it needed to be. And Supertubes answered back, delivering the best waves of the day.

Halfway through the heat Jordy snapped his leash and had to swim in for the runaround. Sitting on pocket nines the manchild could comfortably have come in for a cold drink with his adoring fans, instead he swapped boards and paddled right back out.

“There’s just no better way to start the contest than to make a statement,” beamed Jordy post heat. “To get the best waves and post the best scores.”

And then dropped a 10.  Yup, like that. “There’s just no better way to start the contest than to make a statement,” beamed Jordy post heat. “To get the best waves and post the best scores…”

There were some smaller stories, of course, with one of the main sub plots (as it always is at JBay) being the backhand vs forehand debate.

Kai Otton was the only goofy to win his round one heat, while ratings leader Gabriel Medina (who put pay to local wildcard Dylan Lightfoot’s campaign) and Nat Young having to navigate their way through round two.

The first heat in the water tomorrow will be goofyfooter Matt Wilkinson vs Bede Durbidge. Following his second at last week’s Mr Price Pro Wilko is feeling confident, although he had a frustrating round one.

“My backhand’s feeling really good,” said Wilko post heat, explaining how he reckons that if the goofies play it smart they could be in with a shout for the first backhand win since Occy in 84. Wouldn’t that be some sort of fairytale.  “It’s definitely tough here on your backhand. There’s no-one out here like Occ, but if you pick the slower ones you’ve got more room to score.”

The event needs more or less four full days to complete its 52 heats, currently the forecast does not look great for tomorrow, but according to Director of Surfing, Eric Stedman, there is the promise of contestable waves, after that there will be another pulse on Monday.