Supertubes, Jeffreys Bay – In firing surf at Supertubes, Dale Staples from St Francis Bay won the 2017 edition of the JBU Supertrial by powering through some of the biggest and deepest barrels of the day. Staples was in rhythm with the ocean from the start, picking up all the best waves on his route to the final.

It was a cold and blustery JBay morning, but there were sets at first light and the contest organisers showed no hesitation in calling the event on. As the freezing offshore wind picked up, so the invited surfers hit the perfect lineup, with consistent six-foot waves pouring through.

Former Championship Tour surfer Greg Emslie was a surprise elimination from round one, after leading for most of the heat. Greg caught a particularly long wave, and after his final turn and kicking out, found himself facing a huge set in front of the reef.  “I got caught inside by a big set and pushed onto the reef,” said Greg. “By the time I surfaced from the first wave there was another one, and more behind it. I hit the reef again and eventually got washed all the way down and came in.”

Former event champion Dylan Lightfoot and defending champion Steven Sawyer did not disappoint however, and both won their first round heats. With a wildcard into the Corona Open JBay as well as $10k (R127k) up for grabs there were some determined performances in the breezy conditions with no one giving any quarter.

WQS competitor and perennial Supertubes standout Dale Staples from St Francis Bay shone during the first semifinal. With the swell still rising, Dale found some deep barrels, including one ridiculous 10-point barrel ride at the Impossibles section to emerge with a near-perfect heat score of 19.93 out of a possible 20 points, throwing away a 9.7 as his third wave.

“It’s really good to get such great waves for a contest,” said Dale after his heat. “That ten-pointer was a nice set wave. It looked like it was going to run off away from me, but it actually held all the way to the end.”

Staples continued his form all the way through to the final, which turned into a barrel frenzy as Supertubes, one of the best waves in the world, delivered wave after perfect wave throughout the afternoon. Staples jumped into the lead early on in the final with one incredible double tube ride, followed by a second high scoring ride, and his lead was unassailable from then on.

Mikey February from Cape Town has been having an excellent season but couldnt find the good ones out there and finished in fourth place. Local surfer Matt McGillivray had been looking good all event and some had him touted for the win, but he couldnt match Staples incredible tube riding. Former event champion, a fit and determined Dylan Lightfoot from JBay, found some of the biggest waves of the final, but was unable to string together enough combination moves to get close to Staples, who won the final with a comfortable lead.

“After I got that early one I was feeling really good, and it’s always great to bank a good score in the beginning, ” said a jubilant Staples on the beach afterwards. “Then I got that second nine, and I was stoked and hoping that it would just go flat.” 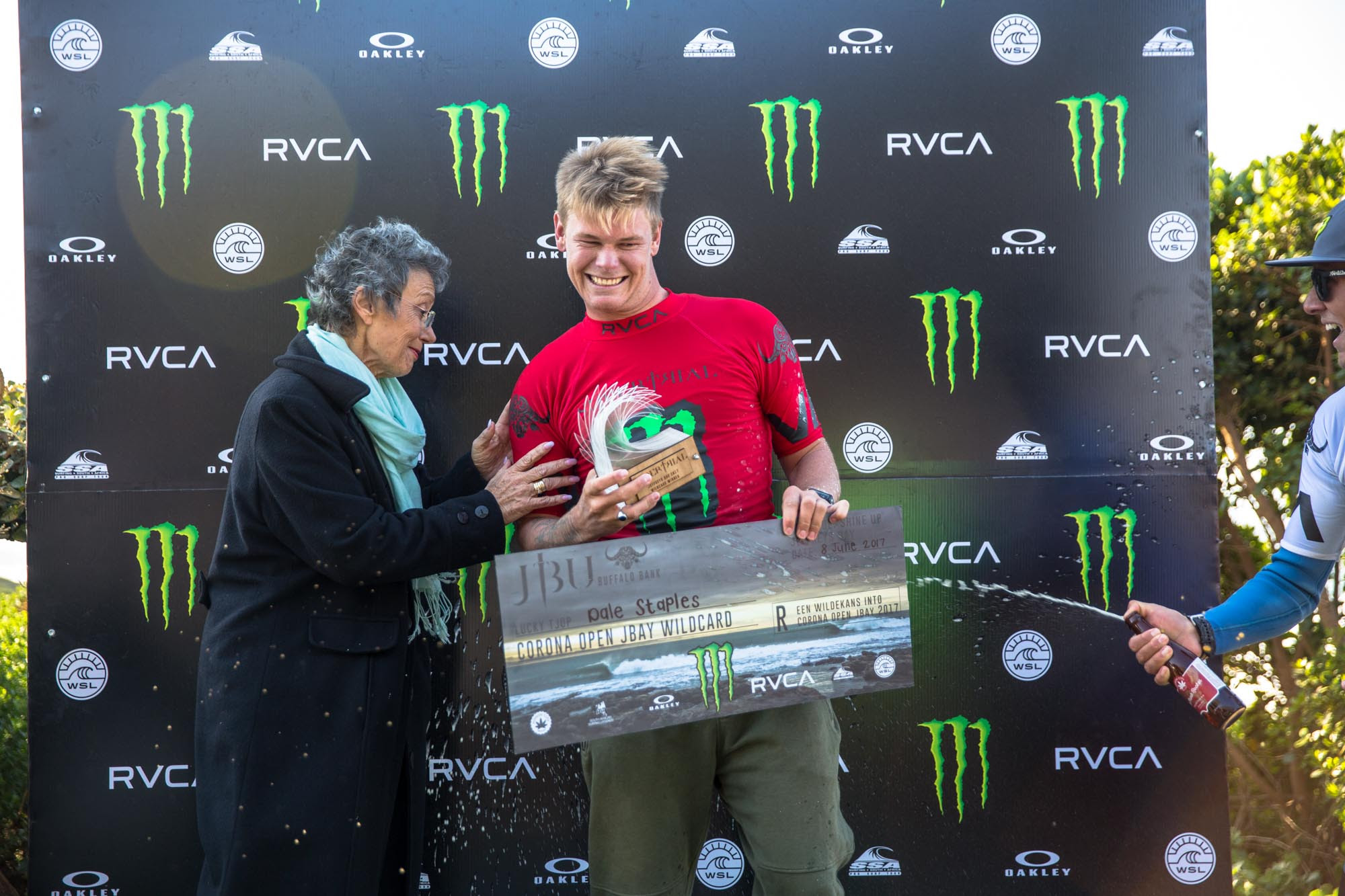 Kouga Mayor Elza Van Lingen came down to support the event and to hand the winner’s trophy to Dale Staples, as runner-up Dylan Lightfoot cheers on. © Van Gysen

The wind was howling offshore the whole day, and quite a challenge for all competitors, but it actually worked for the victorious Staples.

“The wind was actually beneficial for me in this event,” said Staples. “It was like the wind was just holding the main barrel section up the whole day. Some of the barrels looked like they were going to shut down on you and then they just opened up in the wind.”

First prize in the JBU Supertrial consists of a wild card into the Corona Open JBay, $10k (R127k) as well as the valuable Championship Tour competitive experience that comes with it.

Kouga Mayor Elza Van Lingen was in attendance at the event and was rapt with the action in the water. “I’m so proud of all the surfers in he competition, and proud of the fact that we were able to host such an amazing contest,” said Van Lingen. “There is nowhere else in the world where we can run such an event, and I can’t wait for this all to happen again when the JBay Winterfest comes to the town of Jeffreys Bay next month. I hope to see you all there.”

The Corona Open JBay has a waiting period from 12th – 23rd July, and is part of the JBay Winterfest.

High-resolution images are available on request for media outlets.