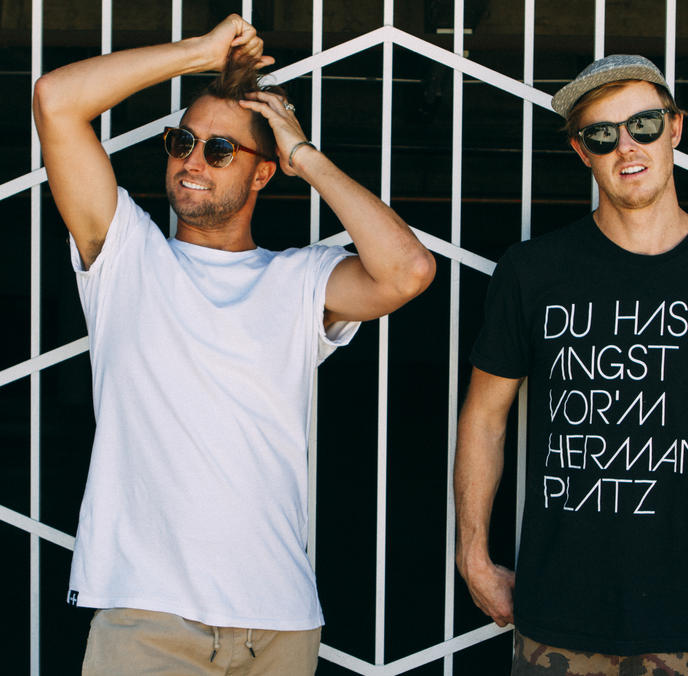 Part of the JBay Winterfest 2016 is the MusicFest taking place at the Jolly Dolphin. Headlining is the Australian deep house duo of Cut Snake.

They comprise two former professional surfers, Paul Fisher and Leigh Sedley. They are both highly skilled surfers who have now taken their other talents to the music world, and have been enjoying great worldwide success.

The JBay gig will take place at the Jolly Dolphin on Thursday 14 July, after the Oakley X Over prize giving and auction, and promises to be a huge evening.

We caught up with the first half of the duo, Paul Fisher.

What were some of your best pro results?
Fuck, I won snapper at 12, then from there took out Bells, and had a bit of a break then went over to Chopes and won there. I was totally burnt out by 16 and just went free surfing.

Imagine that. Good to hear you’re freesurfing. How did you each get into music?
Yeah I got into it from my Mum and it just progressed from there.

How long have you been Cut Snake?
Four years.

For the South Africans, what does Cut Snake mean?
When ya cut a snake’s head off it goes mad! Just like us going mad! We’re as mad as a cut snake.

Who is in charge out of the two of you when you’re doing a gig?
Nah mate no one in charge of us two fuckers. We just get up there and do our thing.

What have been the biggest/best gigs you have ever played?
Coachella in America was pretty nutzzzz this year! Everyone was just vibing and going mad!

How many times have you guys been to SA?
Mate we’ve been to Africa a bunch of times back in the days of competing in the surfing events. We can’t wait to get back there and see all the crew again and talk some shit.

Where have you scored your best waves?
Wok’s secret spot.

Best waves in the world?
Home in Australia! Waves are always fun as fuck, and you have every type of wave you need from reef breaks to some of the best point breaks in the world.

What is the best thing about South Africa for a visitor?
Everything  – the people, the food, the waves and the animals you can go see! It’s a beautiful country.

What are your plans while touring here?
Getting a big piece of LAKKA BILTONG. I wanna gnaw on it like a fucking lion…

What is your tour going to consist of?
Drinking piss and surfing our brains out! Talking shit and playing music! All the way through Durban, Cape Town and JBay, my china!

Wow! How long are you going to be hanging in JBay?
As long as we can! We wanna watch the contest, and we have to surf Supers!

For more on Cut Snake and their music, go to www.cutsnake.com