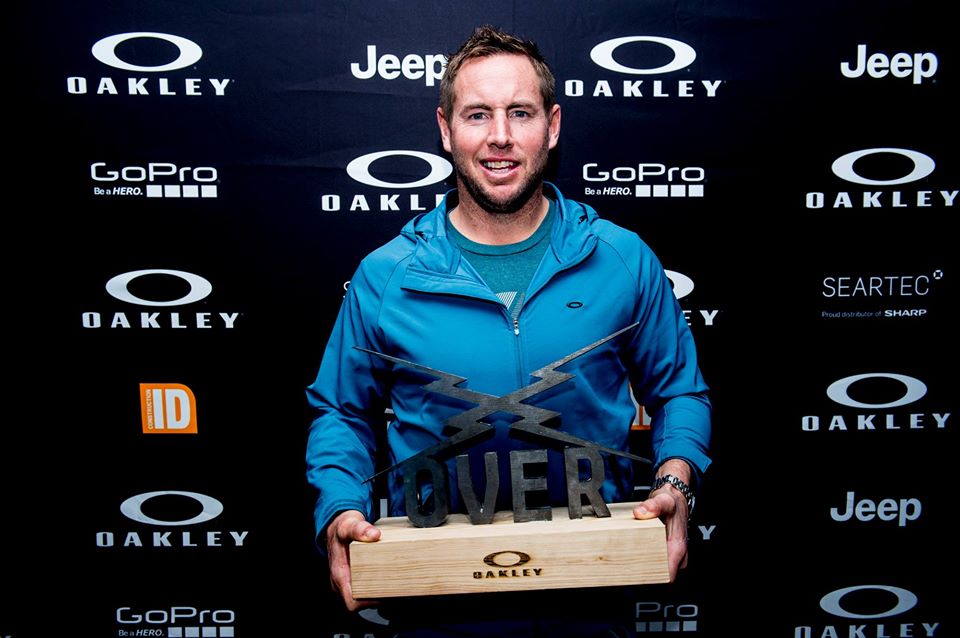 In an exciting finish to the inaugural Oakley X-Over Challenge, Butch James came out on top, after dominating all three disciplines in this exhilarating cross-over event. Butch was strong in the Mountain Biking race and the Golf tournament, and an impressive finish in the surf event final clinched him the overall lead.

“What an unbelievable event and thanks to Oakley for the invite,” said Butch at the prizegiving. “It’s been really amazing to get to know the other 11 athletes, and from a performance point of view it was extremely competitive, and to end up winning feels unreal. I never thought I could ever win it, especially with the surfing stage, but it’s awesome to end up with the trophy.”

The focus of the final day of the Oakley X-Over Challenge, which forms part of the JBay Winterfest, was the surf event that took place at the Lower Point in Jeffreys Bay. There was a lot at stake here, as the overall Champion was going to be crowned after the surfing. A perfect three-foot swell groomed with a light offshore wind greeted the contestants, and there was much excitement amongst them, along with some rather nervous grins.

John Smit was in the first heat of the day, and picked up two amazing waves from the outside, riding them through to the inside, to the screaming and applause from the gathered crowds. “That was so much fun,” said John on the beach afterwards. “I was a bit apprehensive at first, but once I was out there it was beautiful and clean. I’m pretty exhausted though. Being fit for surfing is very a different form of fitness. I don’t know how the guys do it for hours on end. The Oakley X-Over Challenge has been amazing fun,” Smit added. “I can’t wait for next year’s event.”

Bob Skinstad came from behind in his first round heat, picking up a clean set wave in the dying minutes to bank the highest score of the heat with an 8.5 that took him into the final. “It was so good, but also a lot of hard work out there to be honest,” said Skinstad afterwards on the beach. “The wind came up during that heat and made the waves so clean and perfect and I was sitting wide for that last wave. It was a good one, that ran all the way through to the inside and just got me a slot in the final, so I’m stoked.” 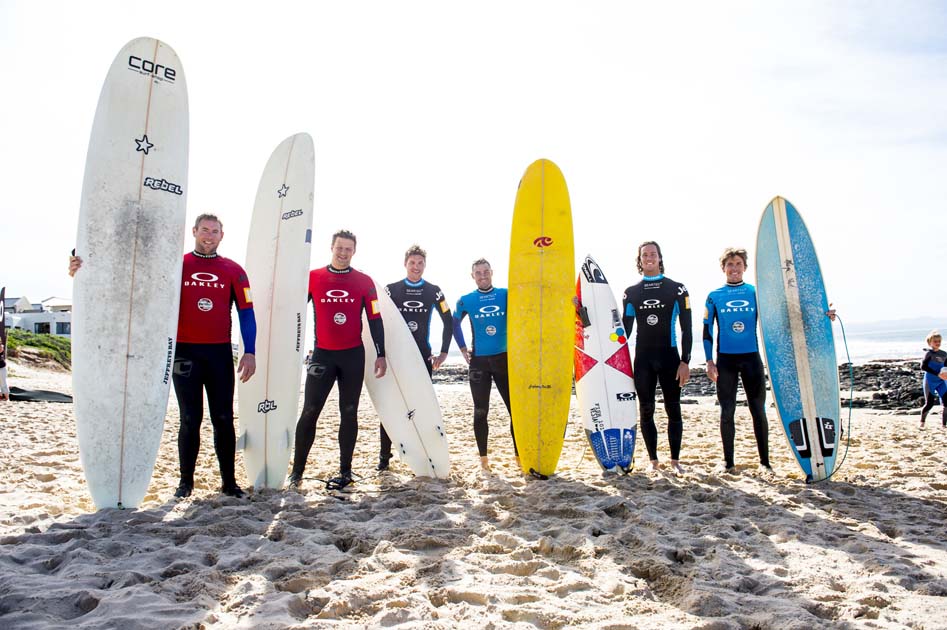 Once the final was under way, it was all about Jordy Smith. Jordy was on fire, and picked up excellent scoring waves throughout the final. The judges awarded him a perfect score of 10 points for his two scoring waves, which means that he got the extremely rare perfect-score 20 points for his heat total. “It was so good out there,” said the ASP 11th-ranked surfer after the final. “I was so surprised at how competitive it was as well. The rest of the finalists weren’t giving an inch out there. They were jockeying for position, hassling for waves and determined to win.” Jordy, who was eliminated from the JBay Open surfing event earlier in the week, was all smiles. “I’m just stoked to make one final here in JBay,” he added. 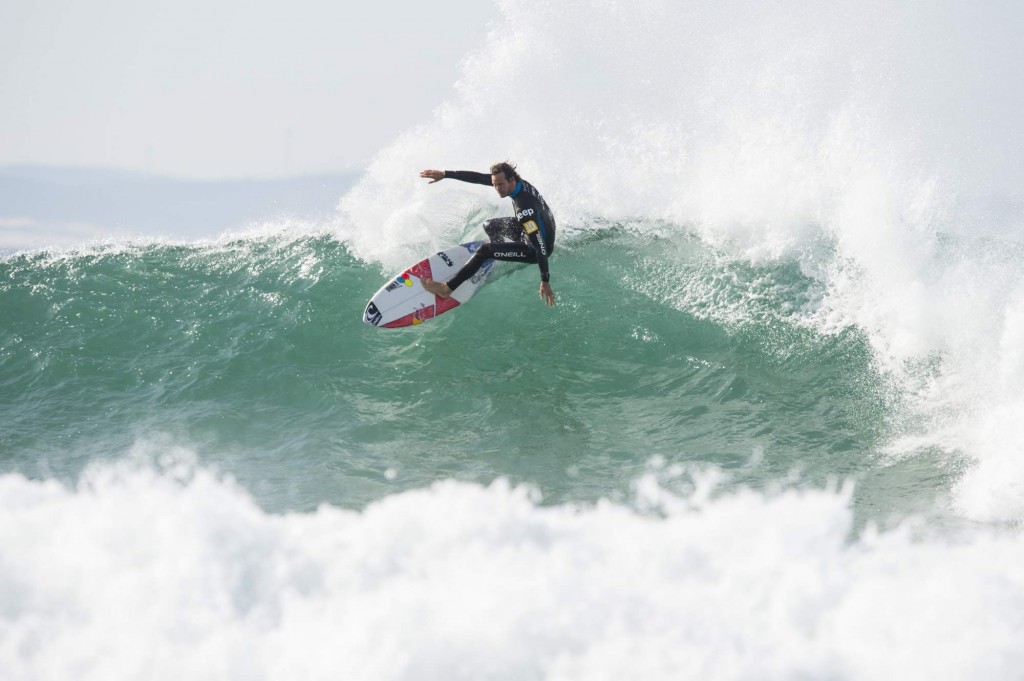 Jordy was in full flight @Kolesky/Nikon/Lexar

Once the dust had settled at the Lower Point, it was time for the scores to be totalized over the three disciplines. Jordy might have won the surfing, but Greg Minnaar was the champion in the Mountain Bike race ahead of Kevin Evans and Raynard Tissink in third, while Ruan de Smidt had emerged victorious in the Golf Tournament, followed by Butch James, and David Miller in third.

Once the scores had been totalled and averaged, it was none other than Butch James who was declared the inaugural Oakley X-Over champion, with Raynard Tissink a close second and Greg Minnaar in third.

Apart from the honour and prestige of winning such an exciting and competitive event, Butch was also awarded the Oakley X-Over trophy, as well as an all-expenses paid weekend for two at the Aquila Game Farm and an Oakley 12 Gauge Watch, valued at R14k

“This has been such a great event,” said Oakley Sports Marketing Manager, and the man behind the Oakley X-Over Challenge, Seth Hulley. “It’s so good to see the levels of commitment and camaraderie amongst all the athletes and guests who partook in the challenge. We’re definitely going to make this an annual event and go bigger next year.” 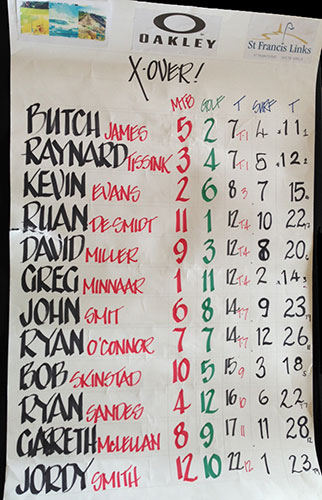 The event hashtag is #OakleyXOVER