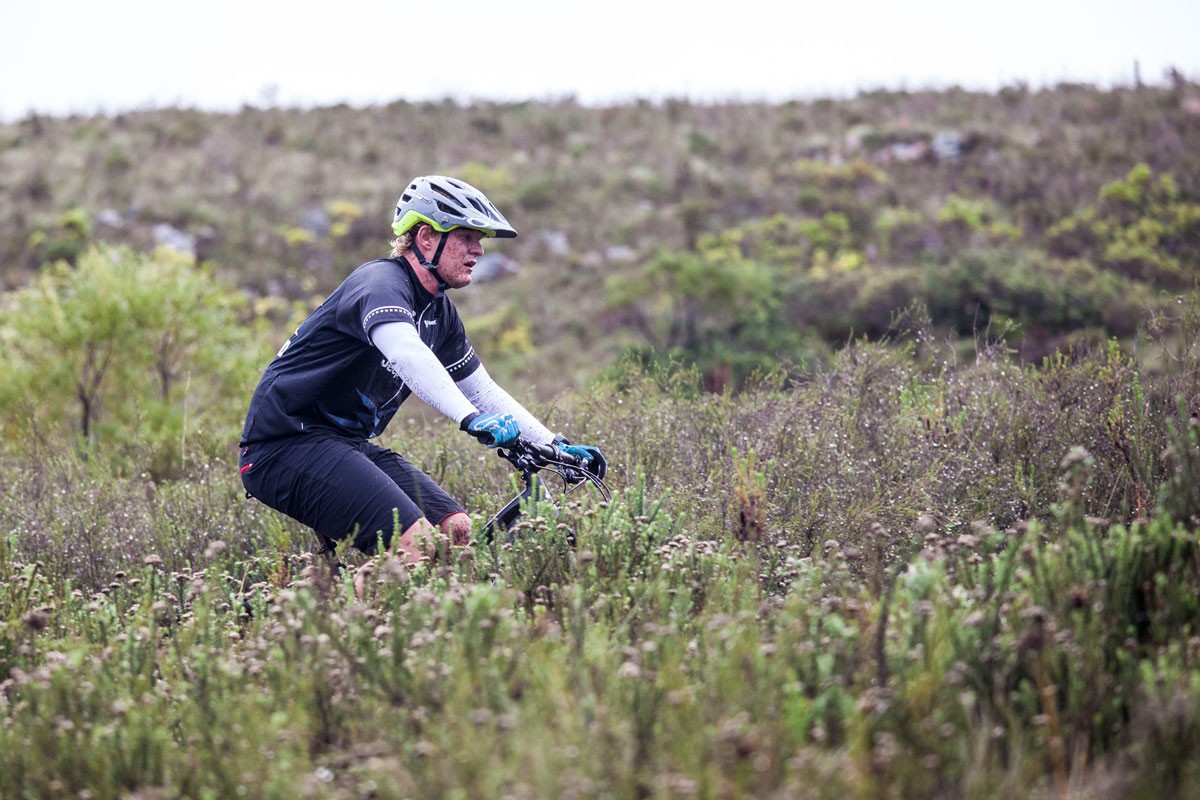 A cross-over event is a tried and tested concept, but usually the sports are, at the very least, slightly related and the athletes all fairly skilled in all of them. When the three disciplines are as diverse as in the Oakley X-Over presented by Seartec, which took place as part of the JBay Winterfest – surfing, golf and mountain biking, things start to get a lot more interesting.

Throw into the mix professionals from a wide variety of backgrounds and you have a recipe for banter, good vibes, fun and camaraderie off the field, and fierce competition on it. The likes of defending champ Butch James, returning athletes Ryan Sandes, Garreth ‘Soldier Boy’ McLellan, Ruan De Smidt, Raynard Tissink, David Miller, Kevin Evans, John Smit, Greg Minnaar and Bob Skinstad were joined by Dale Steyn, Lance Isaacs, Australian surfing legend Tom Whitaker and Kotze, who won his entry through the social media wildcard competition.

So we have surfers riding mountain bikes, cricketers golfing and rugby players surfing. Fourteen world-class athletes with only one winner, over two days of competition.

Overnight rain had turned the trails into a muddy mess making for difficult conditions. It was always going to be a tight race between SA MTB marathon legend Evans and Minnaar, who became the most succesful downhill rider in history when he won his 18th Downhill World Cup crown in Lenzerheide, Switzerland recently.

Evans kicked in early to avoid a repeat of 2014, where Minnaar stuck with him until the end only to out-sprint him for the win. “Ja, I didn’t want Greg to talk me out of going hard, as he did last year,” Evans joked afterward, before adding: “My golf game’s not great at the moment and who knows what the surfing will hold so I had to capitalise on my strong point.”

Stage two was the golf at the Links Golf Course in St Francis. Some quality shots alongside some excellent golf cart driving on the famous course saw the professional golfer Ruan De Smidt claim the win. In a bit of an upset however, Tom Whitaker was runner-up, with the defending X-Over champion Butch James in third place.

For others it didn’t go so well. “It went pretty shocking for me,” said ultra trail runner Ryan Sandes of his performance on the golf course were he spent more time in the rough than on the fairway. “My best shot was one out of the water – I just closed my eyes and swung…” he said.

Sandes didn’t have too good a day on the final surfing stage on the following day, either. “It was just hard work. My legs were starting to cramp so I just couldn’t do anything. I’d rather do a 15-kilometre run than a 30 minute surf,” he joked. “But I would rather surf for six hours than play golf…”

Someone who had a better day in the surfing event, which took place at the same time as the JBay Open of surfing, the World Surf League event which is the cornerstone of the JBay Winterfest, was Dale Steyn. “It was great fun, and the jet ski guys did help a lot,” he said afterwards.

Winner of the surfing event, however was, wildcard Kotze. “It was hard work, I tried to catch as many as I can,” he said afterward. “There weren’t too many good ones,” he said.

Thanks to his win in the surfing and third place in the mountain bike event, Kotze was crowned the overall winner, ahead of Kevin Evans in second, and Butch James in third.

“Obviously the overall win was in the back of my mind the whole time out there in the water! I’m so stoked!” He said afterward. “What a brilliant bunch of guys – this was an amazing experience.”