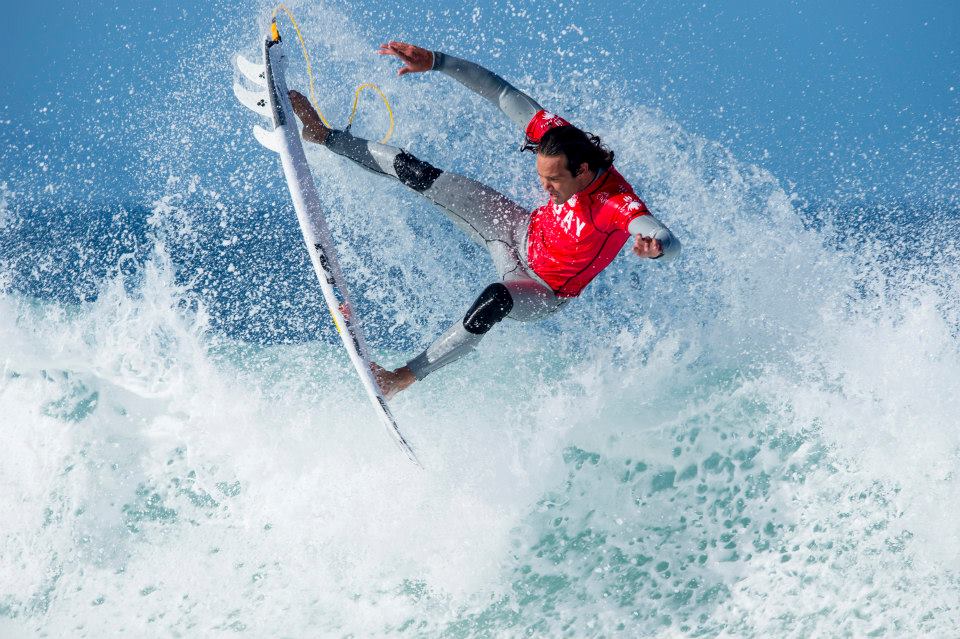 The JBay Open contest organisers opted for a short wait as the tide dropped out before beginning with Round 3 in good three to four-foot waves and light cross-shore conditions this morning. The long range forecast for the waiting period has downgraded slightly, and it was decided to run the contest while the waves were still pouring through.

Joel Parkinson took the first heat over Adam Melling in an extremely close battle, while Josh Kerr beat Miquel Pupo in heat two on his last wave. In another tight contest, in heat three, Taj was trailing against Ace Buchan until the last minute, eventually stroking into a final walled-up bomb and going to town on it, winning by a mere .73 of a point.

The waves continued to reel down the point, as things started heating up. Kolohe Andino came up against Julian Wilson and took to the skies, going for huge aerial moves at the bottom section of the wave, right in front of the judges. His strategy worked as he advanced over Wilson. “I’ve had some decent results this year,” said Kolohe. “I’m hoping to keep it going, and get some momentum for the rest of the year.”

The Kelly Slater v Matt Wilkinson heat was electric, with the younger goofy-footed Australian having arguably his heat of the year. After cracking two big set waves, and scoring a 9.03 and a 9.33 respectively, he had Slater in a combination situation, where he remained there until the end of the heat. Wilkinson has been on a roll this year, and this result will definitely boost his confidence for the rest of this event. “I knew that the only way to beat Kelly was to be on the best waves,” said Matt. “When the waves are so good, anyone can get good scores, and the best surfers in the world know how to get eights and nines out here. Let’s hope I can do something special and keep doing this all the way to the final.”

The upsets continued as local favourite Jordy Smith fell to Floridian surfer CJ Hobgood in a nail-biting affair. It was a close tussle with no shortage of waves, and Jordy was chasing a six-point score towards the end of the heat. He picked up one final good one, but fell unexpectedly, and the judges awarded him an agonisingly close 5.87.

The event continued through till he end of the day, with the non-elimination round 4 run to completion.

Tuesday 15 sees the start of the Oakley X-Over Challenge, the multi-discipline cross-over event, featuring Oakley athletes and celebrities. The challenge consists of  a mountain bike event, a golf tournament and a surf contest. Jordy Smith, John Smit and Ryan Sandes are in town and ready for the event – #OakleyXover – which will culminate with a prize-giving at the Jolly Dolphin on the evening of the 16th. More on the Oakley X-Over Challenge

This weekend sees the Mountain Biking event, the JBay Mountain Bike Open take place on Saturday 16th, starting at 08h00 at the Fountains Mall. There will be 20km, 40km, 60km and 85km routes spanning several private farms in the area, and the various routes support all levels of riders.

The Flamingo Trail Run will take place on Sunday 20th July, starting at 12 midday to embrace the low tide. There will be a 2km, a 12km and a 30km race.