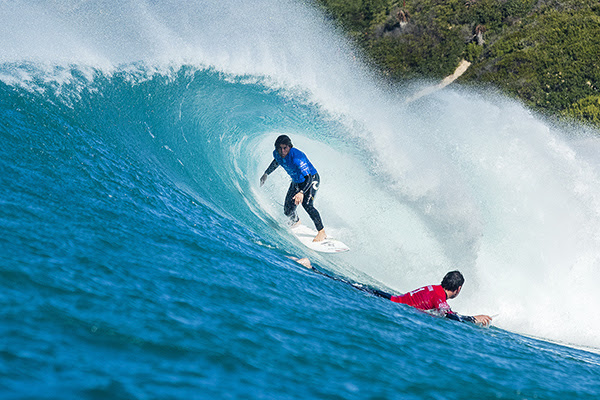 “We’re going to run a complete resurf of Round 4 Heat 3 because we have different conditions today,” said WSL Deputy Commissioner, Renato Hickel. “We are planning to run through the rest of Round 4 followed by Round 5 and we have the Quarterfinals on standby. We have another beautiful day here at Jeffreys Bay with excellent clean conditions so we’re looking forward to another great day of action.”

Round 4 Heat 3 will see Jordy Smith (ZAF), Filipe Toledo (BRA) and Julian Wilson (AUS) battle for a direct advance to the Quarterfinals followed by another huge match-up in Heat 4 between Matt Wilkinson (AUS), Conner Coffin (USA) and Michel Bourez (PYF).

Good size SW/SSW swell will drop off through Wednesday, with the strongest waves expected for the earlier morning (and still fairly solid). We’re tracking an even stronger swell that should rapidly build in through the day on Thursday before fading Friday. Favorable wind on Thursday may trend onshore Friday. The final two days of the waiting period- Sat and Sun- look likely to see much smaller leftovers.

The event will be broadcast LIVE via WorldSurfLeague.com, the WSL app and on Facebook LIVE via the WSL’s Facebook page. Also check the local listings for coverage on CBS Sports Network in the U.S., Fox Sports in Australia, ESPN in Brazil, Sky NZ in New Zealand, SFR Sports in France and Portugal and as part of the EDGEsport Network.

For more information, check out WorldSurfLeague.com.