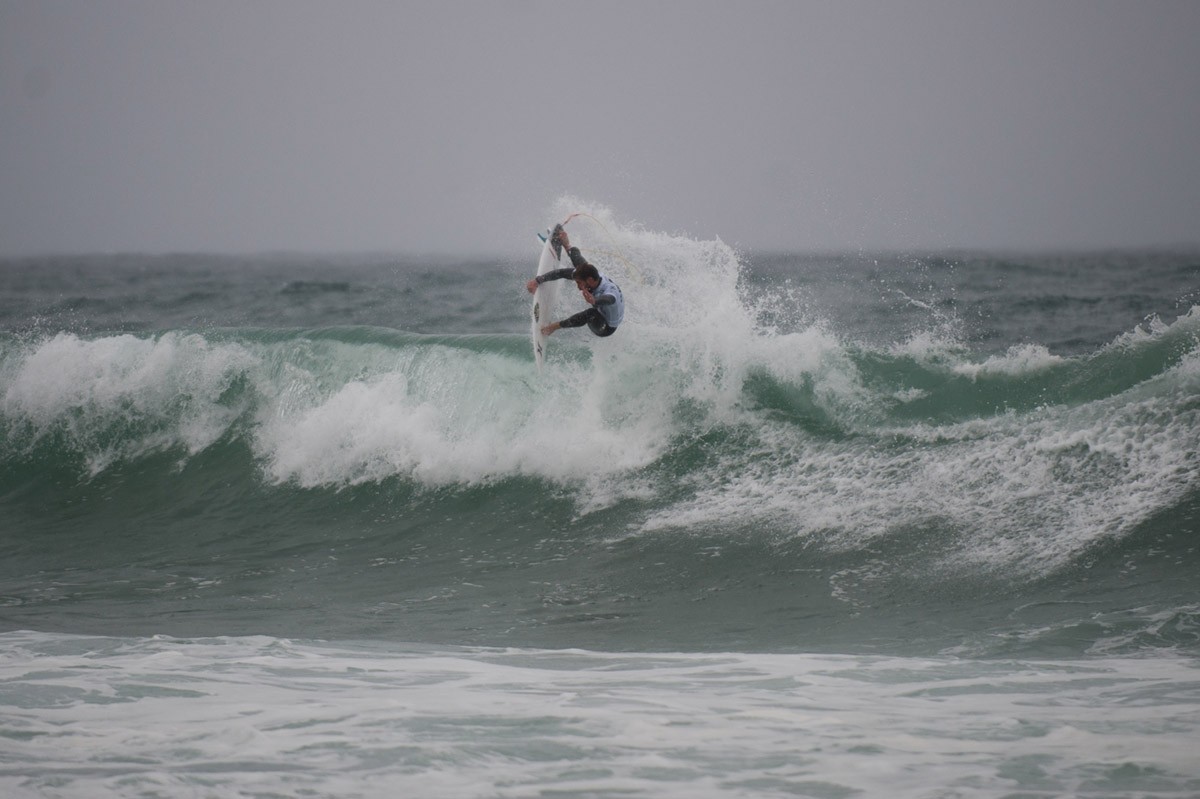 Jeffreys Bay – It was an action-packed day in JBay as the rain came down and the various  events were run off.

After a long wait through the morning as the swell filled in, it was announced that the JBay Open would start at 1pm. It began with Round 4, and being a non-elimination round, some of the surfers took to the skies with abandon. In round 4, first place leapfrogs straight into the quarter-finals, while second and third places go into the 5thround.

Ace Buchan from Australia won the first heat, followed by a triumvirate of Brazilians, with Adriano de Souza, Gabriel Medina and Alejo Muniz taking the three wins in a row. As the rain came down it literally was a Brazilian Storm. A winner of the JBay Open will be crowned tomorrow and the forecast looks very good for perfect waves at Supers.

Icy water that measured between 11 – 12 degree Celsius, heavy rain and strong winds did little to deter the defending Infood Blu Cold Water Classic title-holder Rebecca Newman when she completed the 7.5 km swim in two hours at Marina Martinique in Jeffreys Bay today. Newman swam the event according to Channel rules, which meant she could only wear a speedo type costume, goggles and a single swim cap.

“It was really tough out there today and it was very cold but I felt confident and pushed the pace just after the 5 Km mark and things worked out for me,” said Newman.

The first man home was Iain Geddes who has a Robben Island crossing under his belt  – experience which helped in the chilly salt water canals of Marina Martinique. Geddes finished in 2 hours 6 minutes.

Full results can be found at www.swimmingplus.com 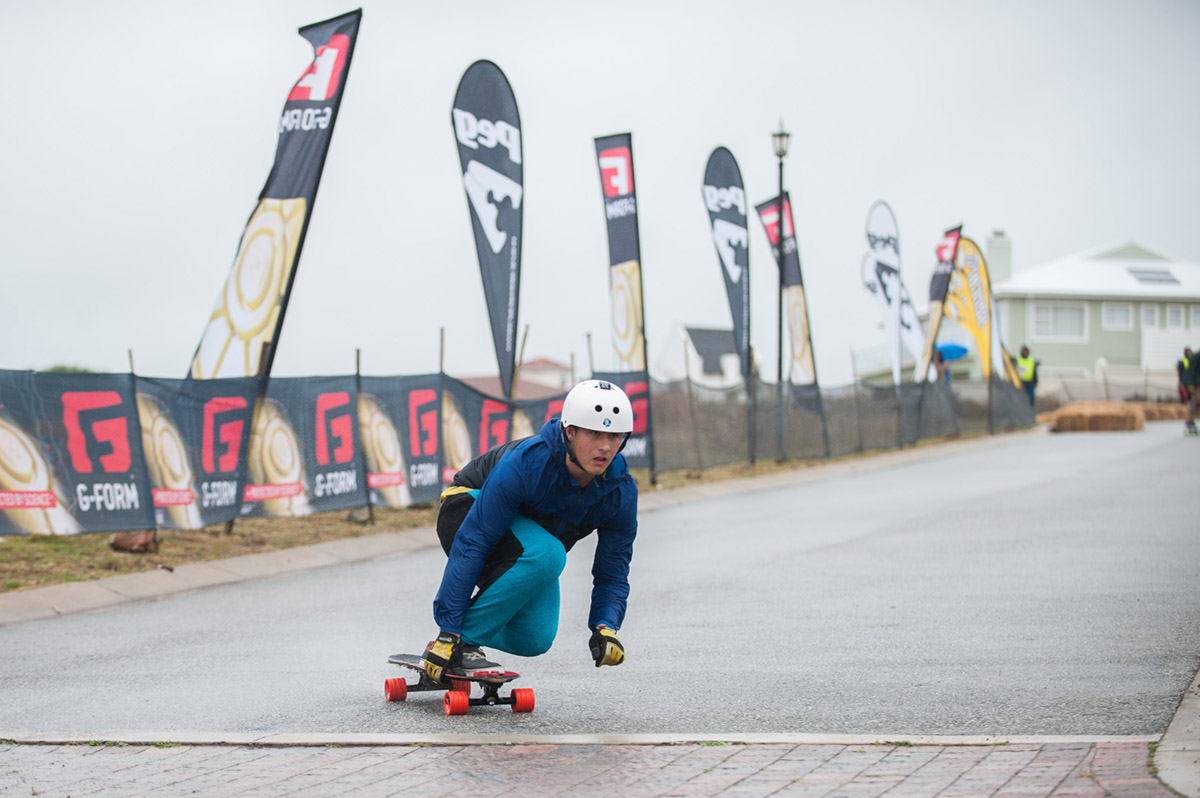 The third edition of the Core Sokkie Jol presented by Sector 9 went down in torrential conditions at the Die Vrieskas Blue Water Estate.

The Sokkie Jol is a fun skateboarding event that combines downhill riding with obstacles (turns, berms and ramps). The day started with two-hours of practice runs for the riders to get used to the wet conditions. The weather couldn’t deter the enthusiasm, and the riders attacked the course with gusto.

When the 43 entrants were thoroughly used to the course (and thoroughly soaked, many wearing black bags to keep them dry) the racing got underway with a time trial. From there the top 32 went into a man-on-man, elimination race format.

The ‘godfather’ of downhill racing in South Africa, Kent Lingeveldt, came up for the event from Cape Town. “Sure it’s dangerous in the wet, but only as dangerous as you make it,” he commented during the early runs. “It’s new tar here, so even though it’s wet, it’s slightly grippy so cats can still go fast. Obviously not as fast as if it were dry, but it’s controllable,” he said.

Tyron Coetzee took out the win. “It was very interesting coming up here yesterday to help out with the setup. It was dry and I was amped, but today was pouring with rain, so it was wet and slippery,” he said afterward. “There were a lot of guys sliding out. It was really intense, so you really had to think about what you’re doing.” 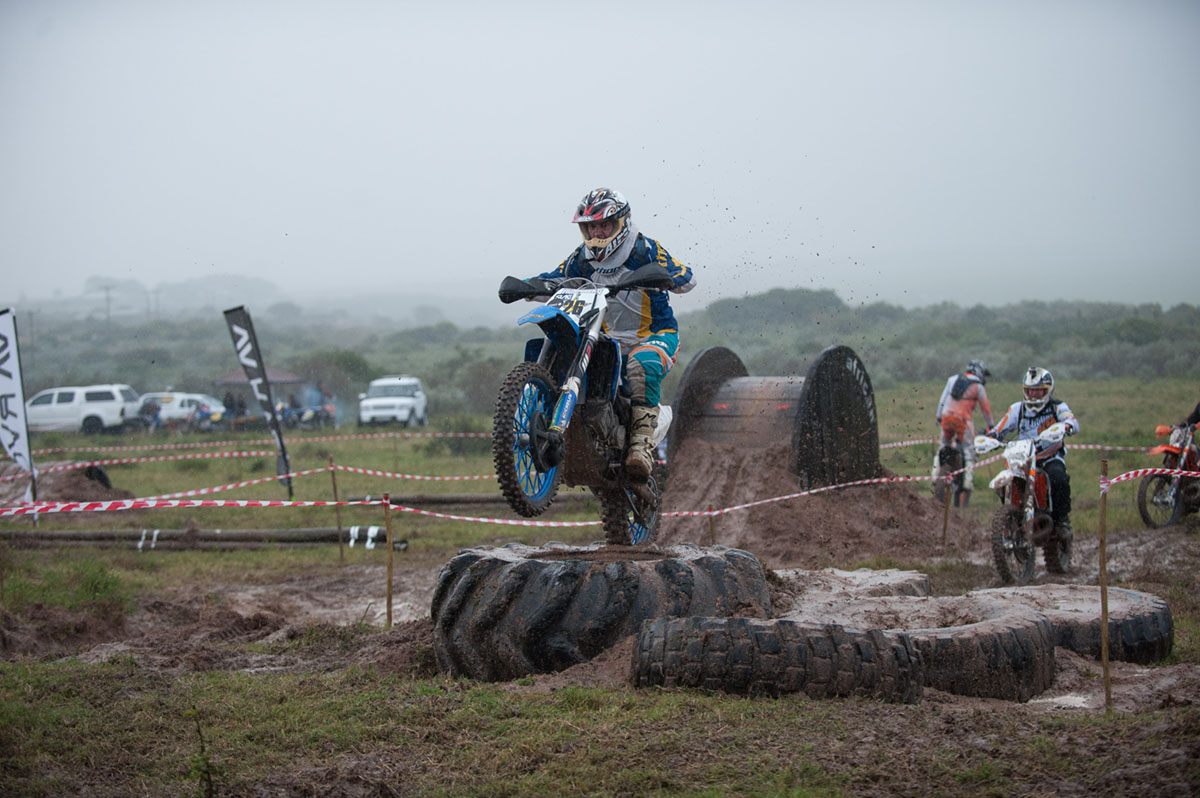 Now in its third year, Slake Adventures once again hosted the JBay Winterfest Funduro. Torrential downpours the night before had mad the course muddy and slippery. Much of the 15-kilometre route featured tight bush singletrack tunnels and both flat and technical sections which offered something for all levels of riders.

The Jeffreys Bay Winter Music Festival continues tonight at the Jolly Dolphin, with Desmond and the Tutus featuring tonight, along with Grimehouse. Tickets available at the door for R70, and R50 if you book online. More info here www.jbaywinterfest.com/music-festival/

The event hashtag is #jbaywinterfest